How to Install the Center Fin

Although installing the center fin on you new SUP can seem daunting at first, we promise that it really is quite simply.  Simply follow the steps outlined below and you’ll be out on the water in no time!

Step 1: Make sure you have your fin, fin screw, and nut (these were likely in plastic bags taped to the packaging your board came in)

Step 2: Thread the nut onto the screw just enough to be able to lower it into the track of the fin box.  Lower it in and slide it about 3/4 of the way up towards the nose of the board. 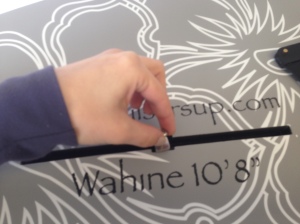 Step 3: Remove the screw, leaving the nut in the fin box. 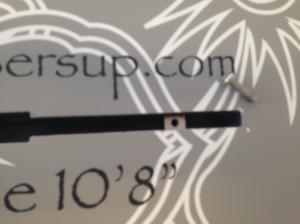 Step 4: Lower the back of the fin (the part with the small metal bolt that runs through it) into the fin box, and slide it towards the tail end of the board.

Step 5: Lower the remainder of the base of the fin into the fin box, making sure you line up the front of it with the nut below.

Step 6: Place the screw through the hold at the front of the fin and the nut below.  This will secure your fin in place.

Just that like you’re done!  It is a simple process, but that is somewhat counter-intuitive.  With a little practice you’ll be installing your fin in just a couple minutes, and getting out on the water faster than ever!